Skip to content
What’s Next for the Mortgage Industry?

What’s Next for the Mortgage Industry?

I have just returned, or should I say recovered, from my second commercial and multifamily real estate industry conference in 30 days. I have to say that for those who concentrate in the multifamily sector, the question of the day is, “When – or if – and in what form or fashion will we see GSE (Fannie Mae and Freddie Mac) reform?” Many suspect, as do I, that if any reform action ensues, FHA (Federal Housing Administration) will not stay under the radar. Here are my thoughts on this and other current issues and how they will impact the ability to finance or refinance a multifamily property.

As a reminder of what most of us are already acutely aware, Fannie and Freddie currently owe $117B and $71B, respectively, to the U.S. government, who is currently acting as conservator for the GSE’s. In return the U.S. Treasury receives 10% on these funds as a preferred stock dividend, . Interestingly, the legal definition of conservatorship is “where a judge appoints a responsible person or organization (called a conservator) to care for another adult (called a conservatee) who cannot care for himself or herself or manage his or her own finances”. Now think about that for a minute. A responsible adult, which in this case is the United States government, is the conservator over the GSEs because they were unable to care for themselves or manage their finances. I am not really sure what to say about that.

For the moment, pushing aside any direct discussions about how we will finance apartments in the immediate future, I think as a country we have to have a serious discussion about what we want our home mortgage business to look like, because the industry has essentially been nationalized. This will be a core driver of debate if serious GSE/FHA reform talks ever happen. I am not concerned that currently the federal government now holds and/or guarantees over $3 trillion of home mortgage loans because it could eventually be unwound or held to maturity and was a necessary evil of recovery. My worry is that 5 years after the financial meltdown, still 97% of new home mortgages carry some sort of government guarantee or backstop.

With the passage of the Dodd–Frank Financial Regulatory Reform Act, we indefinitely monopolized our home financing options to one player, Uncle Sam. Absent amending this legislation or some seriously creative regulatory reform ideas, this is the destiny of our country. Kind of like Hugo Chavez unexpectedly arriving at a Venezuelan oil field owned by Exxon and declaring, “I am taking this for the people…Exxon, you get book value.” In reality he was taking it for his revenue. Of course, the nationalization of our home mortgage industry was not that overt and I doubt was really even intended by many who favored Dodd-Frank, because it was borne of events that demanded “political expediency” irrespective of the long term consequences. Hold on to what I just said about revenue, because it may become a behind the scenes factor in some of the reform decision-making.

Let us not throw stones in glass houses or at those in the single family mortgage business, because as the trends indicate below, 75%-85% of all multifamily lending activity is reliant upon some sort of U.S. government guarantee. However, unlike the single family home mortgage business, this trend is temporary and substantially caused by market forces and so FHA and the GSEs are performing their intended purpose of closing the liquidity gap when private sector capital becomes scarce.

Conservative policy makers in Washington fear that FHA and the GSEs’ government guarantee and the resulting rate advantage are “crowding out” more expensive private capital that would otherwise be put to use financing apartments. Hence, this was one of the purported reasons for raising FHA’s Mortgage Insurance Premium (MIP) as well as pressuring the GSEs to raise their guarantee fees. Sounds like a good story, and I am sure that many in DC who are less in tune with our industry really believe this. However, the real culprits are the silent forces deep inside the House Budget Committee and the gnomes that work in the basement of the Office of Management and Budget (OMB), who are responsible for ensuring that the federal budget balances and all new discretionary spending initiatives are paid for. If Congress wishes to pass legislation that that the Congressional Budget Office (CBO) says will cost $10, then the sponsoring legislative staff goes on a scavenger hunt seeking a $10 revenue offset or the debt will have to be increased and passage becomes a very complicated affair involving multiple Congressional committees and backroom deal making. Considering that almost every Senator or Congressman has something they want passed that costs money, those pockets of extra revenue become very scarce, and only the most seasoned staffers know where to look.

Several years ago I was leading a lobbying effort with the backing of a bipartisan coalition of influential southern Senators to simply extend the deadline to place in service a group of proposed Gulf Coast apartment developments, so they could retain a Hurricane Katrina subsidy that was already awarded to them. It seemed like a slam dunk except that the Joint Committee on Taxation (a group sort of like the CBO) inexplicably decided the extension would cost $60M. I could spend my life trying to figure out the rationale behind that cost assumption and never get it. After one year and a monumental effort, a revenue offset was located and the legislation passed. I am almost embarrassed to admit, but someone located a $62M of revenue offset by increasing the penalties non-profits pay for the late filing of their tax returns. That is a true story, and ironically several years later I was in a casual conversation with a CPA that did tax work for non-profits. Guess what he was cussing about? I kept my mouth shut. I never asked who got the extra $2M. Do I now need to elaborate anymore with regard to the real reason for the MIP and Guarantee fee increase? If it is taken away, somebody will lose their revenue offset for something. Hold that thought.

See the breakdown below of who has been lending to multifamily and what sectors still have the biggest holdings of debt. It is not readily apparent from the below table, but the whole argument regarding the GSEs’ crowding out private lenders is quickly becoming a non-issue as CMBS spreads are closing to within a hair of the GSEs.

Fannie and Freddie combined have increased their guarantee or holdings of multifamily debt to about 38% of the total multifamily loans outstanding and even if CMBS hits the 2013 projections of $90B (multifamily is typically 15% of CMBS, so expect $14B), the numbers are still far short of the peak in 2007 when CMBS securitization was $287B. However, 2013 is simply seeing CMBS securitization jettisoning its inertia, and a real pick up in momentum will occur in 2014.
It always does. 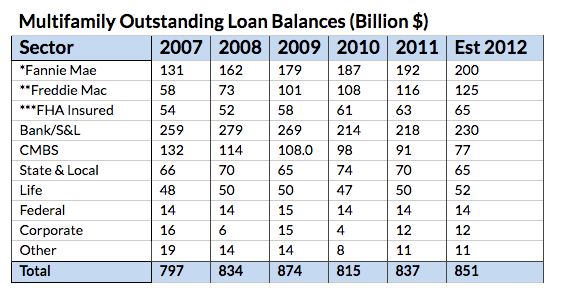 So what are the practical implications I see materializing from the dynamics just discussed?

For all of us working in the this industry, let’s enjoy 2013 and start thinking about 2014.